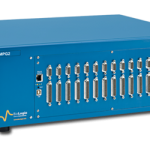 The MPG-2 is a multi-channel, research grade battery cycler designed for research on intercalation compounds, batteries and supercapacitors.

The MPG-2 is the next generation of the Bio-Logic’s popular MacPile testing unit.

Battery testing typically requires a large number of simultaneous tests being performed. As a result, the configuration of MPG-2 is fixed at 16 channels. Each channel is an independent potentiostat / galvanostat. The MPG-2 is controlled by a PC using a USB or an Ethernet connection. When using an Ethernet connection, the MPG-2 can be installed on a Local Area Network to allow multiple users to access the instrument.

Each channel has two analog inputs and an analog output to allow interfacing with external instruments. For many battery experiments, it is sometimes necessary to control and record the cell’s temperature or the temperature of a thermostatically controlled chamber.

The MPG-2 is supplied with EC-Lab® software, especially adapted for battery and supercapacitor applications. Ten of the MPG2’s techniques are designed specifically for batteries. There are also general electrochemistry techniques which are important in battery research, such as cyclic voltammetry. Specific analysis tools are also available.