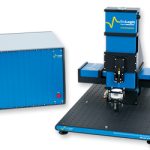 The principles of LEIS are similar to those employed in traditional bulk EIS, in that a small sinusoidal voltage perturbation is applied to a working electrode sample and the resulting current is measured to allow the calculation of the impedance. However, rather than measure the bulk current, a small electrochemical probe is scanned close to the surface, measuring the local current in the electrolyte.

Producing area maps over a sample at a single frequency has never been easier. The LEIS470 also allows the user to make galvanic or bulk impedance measurements simply by choosing which mode the potentiostat is operating in, and the software does the rest.